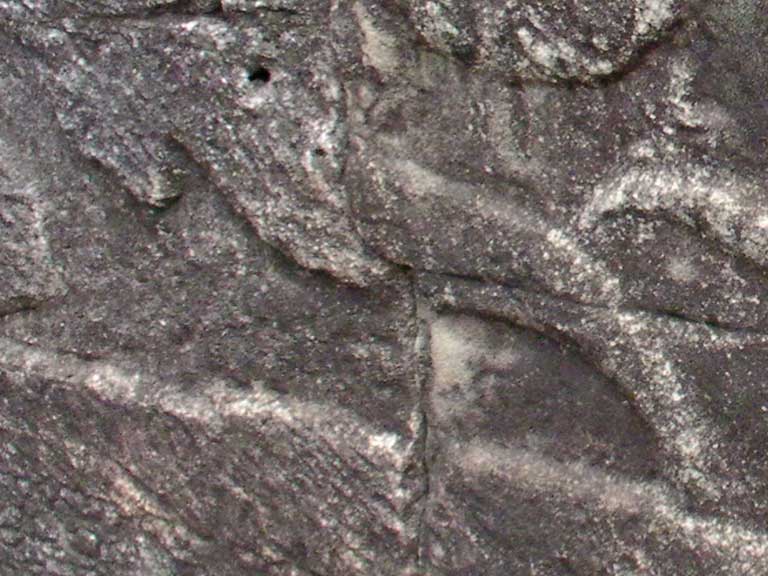 So here we are volunteering to research Seahorses.

These little creatures are the reason MCC was originally created, watching them, photographing them, getting to know every individual that we dived with, and then the trawlers started!! first one site, then another until almost all of our diving sites were devastated and destroyed, Instead of our daily visits it could take weeks just to find one individual.

So we started to fight back and that is how MCC began, and now 8 years later we are not only researching but also fighting for these little guys and also every ecosystem left that is under threat from illegal trawling boats, dragging their nets indiscriminately across the bottom of the ocean devastating everything they pass over. But its not all doom and gloom, our work is paying of and now we have secured areas that we can research and where we can return daily to see and document the lives of these amazing creatures.

You can read more about MCC’s Seahorse research in National Geographic and on the Project Seahorse Website.

Below are a few interesting seahorse facts and a little background on Seahorses in Cambodia.

The Seahorse itself is a wonderful creature that has for centuries been believed to hold magical and medicinal qualities (these myths have led to Seahorse populations around the world being targeted). A seahorse has a horse-like head, bony plated body and prehensile tail. Today, there are about 32 known species of Seahorses. Seahorses make up the genus Hippocampus, which is from the family Syngnathidae, which otherwise contains Pipefish, Pipehorses and Seadragons.

To date Marine Conservation Cambodia has identified and photo documented 5 Confirmed species of Seahorse with 3 more species suspected by both MCC and Project Seahorse of being in Cambodian Waters. There is also a definite possibility of other species or even sub species that have yet to be positively identified. You can see a selection of our previous Seahorse Reports here, for our current research and documents please contact us. 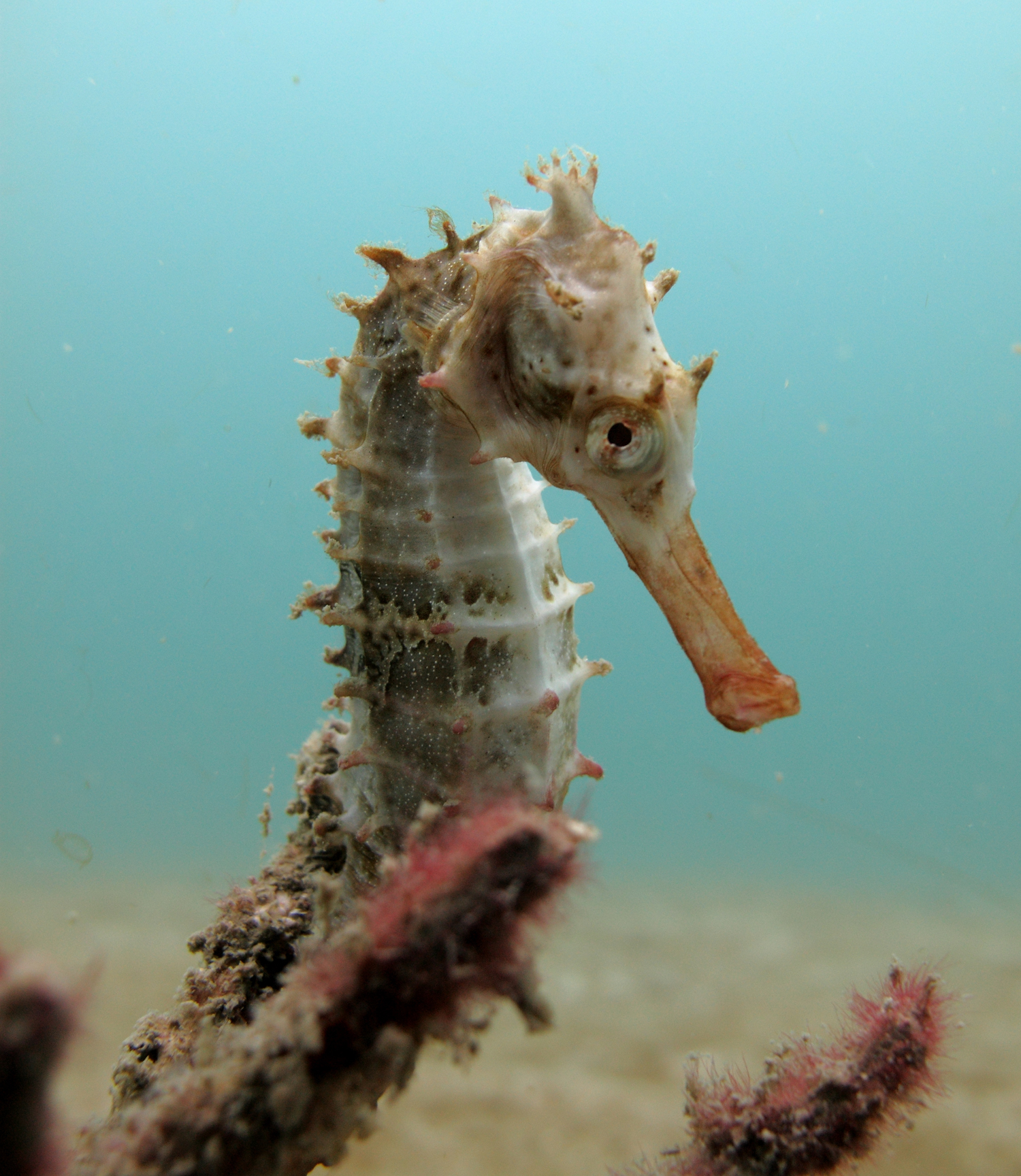 Most Seahorses in Cambodia are found in coastal waters, typically at depths of 1-30 meters, occurring in relatively sheltered environments among sea-grasses, kelp beds, rocky reefs, mangroves, Sandy bottoms and coral reefs. Unfortunately these are some of the most vulnerable of Cambodia’s marine environments, highly susceptible to disturbance caused by human activities. 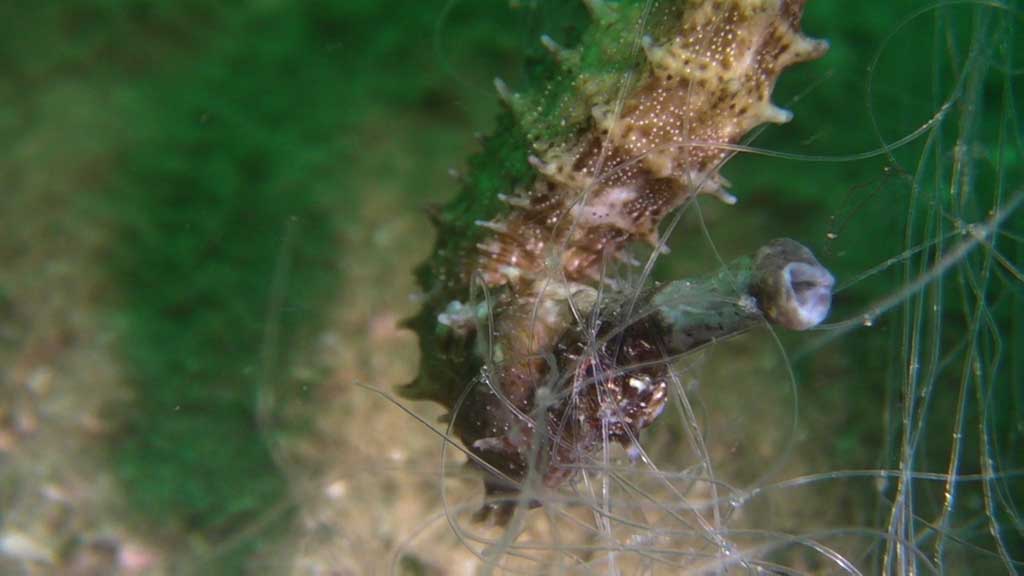 Conservation and protection of seahorses requires an understanding of the biology and behaviour of the animals and the threats that they face. Since early 2006 we have been observing the increased threats to these creatures in Cambodian coastal waters. Seahorses where an abundant species in Cambodia. Up to 7 species have been identified so far at both sandy sea bed areas and sea grass meadows near Sihanoukville and Kampot but the numbers have dropped dramatically and some species have not been seen at all during the past 12 months. To protect these beautiful and secretive creatures of the sea we perform extensive research on their populations densitys, their biology and their behaviour. We have managed to secure two of the main breeding grounds and are currently working on the physical protection of these species as they are highly vulnerable to illegal and destructive fishing techniques especially weighted bottom trawling. Demarcation of these areas through deployment of physical barriers is one of many ways to realize protection. The creation of community patrolled areas is another, with the help of the community on Koh Rong Samloem, local authoritys and the fisheries administration we have come along way in stopping the decline of these beautiful creatures. 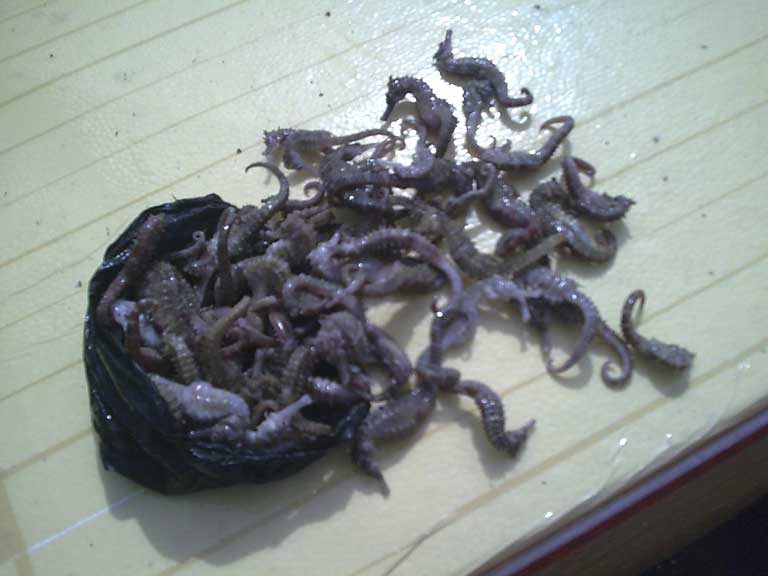 Many Syngnathids are listed as threatened on national and international criteria. Seahorses are listed in the United Nations Environment Programme-World Conservation Monitoring Centre (UNEP-WCMC) Animals of the World Database and are included on the International Union for the Conservation of Nature and Natural Resources (IUCN) 2000 Red List. Seahorses are included in the Cambodian list of endangered and protected species however this list is not 100% adopted yet.

The international trade in seahorses Hippocampus spp for traditional medicines, aquarium pets, and curios is a huge, valuable and seemingly unsustainable. The majority of landed seahorses are sold on to be used in traditional Asian medicine’s. Traditional Chinese Medicine is recognized by the World Health Organization as a viable health care option, and has a global constituency. Seahorses are used to treat a range of conditions, including respiratory disorders such as asthma, impotence and other sexual dysfunctions, and general lethargy and pain.

Many different nations and territories around the world are involved in buying and selling seahorses, from Ecuador to Italy to Mozambique to the U.S.A. The largest known net importers are China, Hong Kong, and Taiwan. The largest known exporters are Thailand, Vietnam, India, and the Philippines. Most of Cambodia’s illegal trade in Seahorses goes through the beach market in Kep and is directly transported to Vietnam the current price per kilo according to local sources is 500 us dollers per dried. 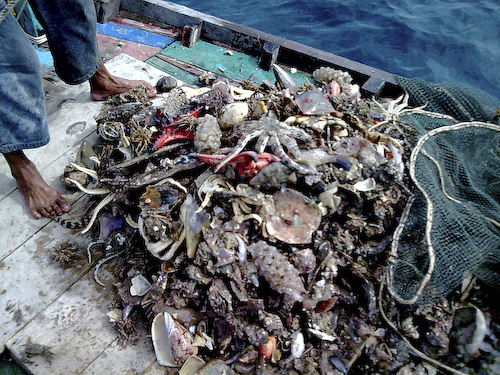 In Cambodia the combination of directly targeted catch and the huge incidental by-catch in weighted bottom trawling nets coupled with the destruction of large areas of seahorse Habitat has placed Cambodia’s once plentiful Seahorses at serious risk. Conservation and management plans are urgently required. The new community conservation areas around Koh Rong Samleom, Koh Rong and Kep play an important role in the conservation of Cambodia’s vulnerable Seahorse populations. These new conservation areas will if well policed help to address the issues of habitat loss and also direct catch and by-catch by offering a haven for these dwindling populations.

Extensive habitat loss resulting from human activities such as coastal developments and destructive fishing techniques, dredging, infilling and removal of mangroves and seagrasses, has managed to fragment Seahorse populations and may have resulted in localized extinctions as some species once frequently encountered have not been seen for many months. 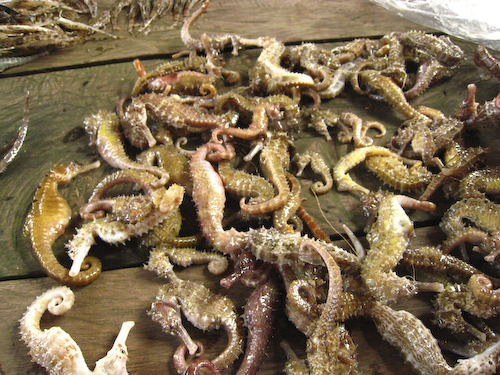 The commercial trade in Seahorses, from target fisheries and by-catch fisheries, is currently thought by many different organisations to be the major threat to Seahorse conservation worldwide.

Seahorses were the main focus when we started Marine Conservation Cambodia, our team has now been working on securing the saftey of Cambodia’s seahorses since 2007. We have managed to stop most illegal collections of seahorses around the Islands of Koh Rong and Koh Rong Samleom, and we are now actively involved in stopping the illegal and destructive fishing within Kep province that is destroying the local seahorse populations and critical habitats, here are some of the ways that together with our volunteers and interns we are achieving this. 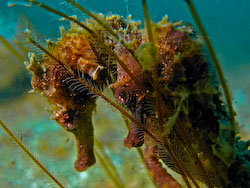 Seahorse biology causes most species to be particularly susceptible to over-fishing:

These problems are being investigated by acquiring comprehensive knowledge of Seahorse biology and behaviour within the species found in Cambodian waters. As much information as possible is being collected on areas such as growth rates, longevity, juvenile dispersal mating habits and general habitats to be able to create a comprehensive protection/conservation program. 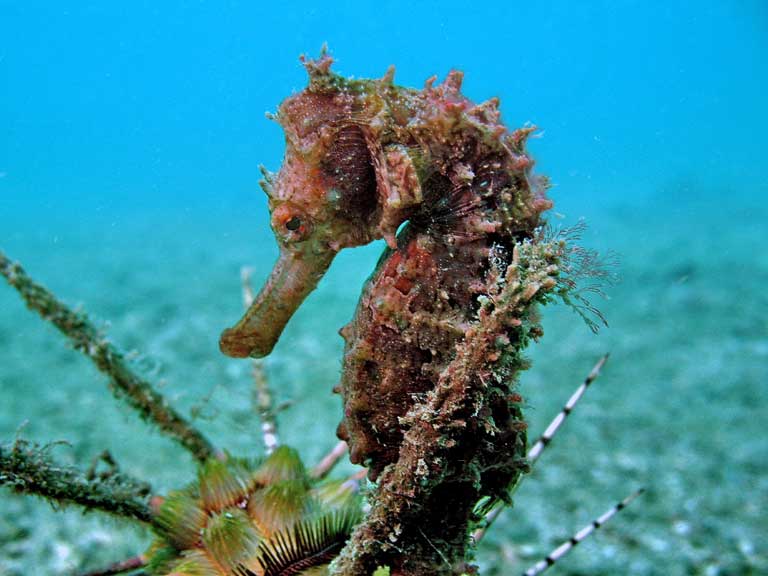 Seahorses have heads at right angles to the body and fully prehensile tails, which wrap around sea-grass stems, corals, sticks, or any other suitable natural or artificial object. These traits, along with a pouch for the young and eyes that swivel independently of each other, lend to the unique nature of these fish. Instead of the scales found on most fish, seahorses have a thin layer of skin stretched over a series of bony plates visible as rings around the trunk. These rings are useful in identifying species, as are the cheek spines and coronet (a crown-like group of spines on the top of the head). In addition to the spines, some species also have bony bumps or skin filaments protruding from these bony rings.

Like other fish, they breathe through gills, extracting oxygen from the water that passes over them. Unlike other fish, however, the gills are small and compacted, almost grape-like in structure. Seahorses swim using the propulsive force of a quickly oscillating dorsal fin, and use the pectoral fins on either side of the body for steering and stability. 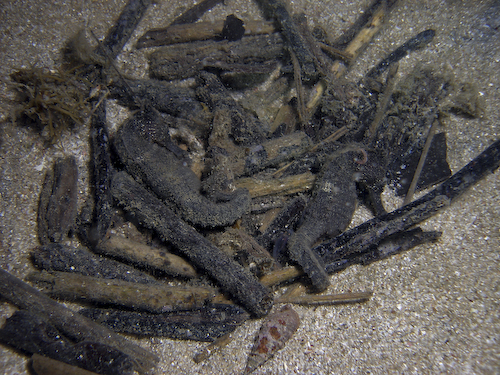 Seahorses are masters of camouflage, changing colour and growing skin filaments to blend in with their surroundings. They are more adapted to maneuverability than speed, and therefore rely primarily on camouflage to avoid detection from predators. Short-term colour changes may also occur during courtship displays and daily greetings. Male and female seahorses can be told apart by the presence of a brood pouch on the male.

Seahorses have no stomach or teeth. They suck in prey through a tubular snout and pass it through an inefficient digestive system. Seahorses are voracious predators, relying entirely on live, moving food. They will sit for prey to come close enough and then sucking them rapidly from the water with their long snouts. Their eyes move independently of each other, maximizing their search areas. They will ingest anything that is small enough to fit into their mouths mostly small crustacea such as amphipods, but also fish fry and other invertebrates. 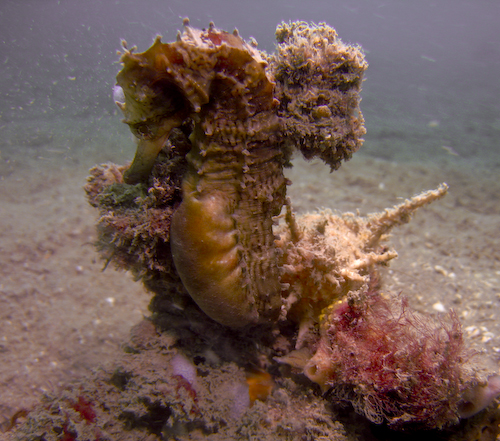 The male seahorse, rather than the female, becomes pregnant. This unusual mode of reproduction is the most extreme form of male parental care yet discovered. Natural lifespans for seahorses are virtually unknown. Most estimates come from laboratory or aquarium observations. Known lifespans for seahorse species range from about one year in the smaller species to an average of three to five years for the larger species.

Sexual maturity in males is usually determined by the presence of a brood pouch. Male seahorses are able to become pregnant any time during the breeding season, which varies with species, and is most likely dependant on temperature of the water. Other factors that may affect the timing of the breeding season are monsoon patterns and the lunar cycle.

Most species of seahorses are monogamous, forming pair bonds that last the entire breeding season (and perhaps even last over several breeding seasons), although some species may not be pair-bonded. Pair bonds are reinforced by daily greetings in which the female and male change colour and promenade and pirouette together. This dance lasts several minutes, and then they separate for the rest of the day. The greetings occur throughout the male pregnancy, and are even thought to ensure that the male and female are ready to re-mate at the same time. Once the male has given birth and it is time to re-mate, sometimes only hours later, this greeting is extended into a courtship that, for one species, lasts up to nine hours. 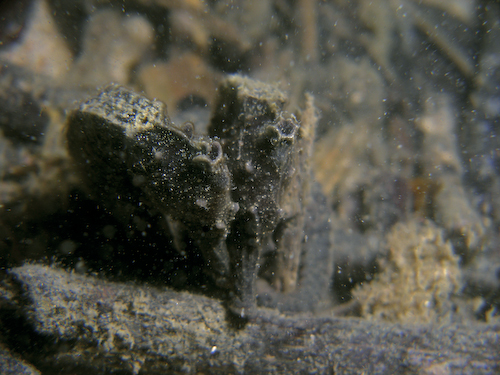 The female inserts her ovipositor into the males brood pouch, where she deposits her eggs, which the male fertilizes. The fertilized eggs then embed in the pouch wall and become enveloped with tissues. The pouch acts like the womb of a female mammal, complete with a placental fluid that bathes the eggs, and provides nutrients and oxygen to the developing embryos while removing waste products. The pouch fluid is altered during pregnancy from being similar to body fluids to being more like the surrounding seawater. This helps reduce the stress of the offspring at birth. 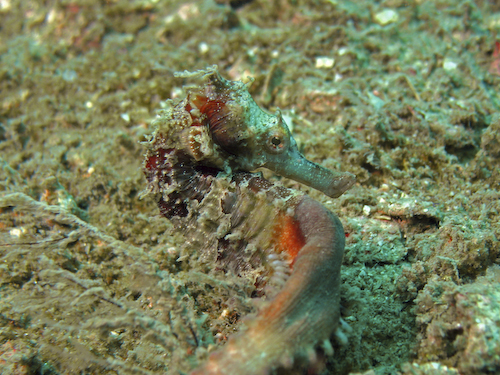 Pregnancy lasts between two and four weeks, the length decreasing with increasing temperature. At the end of gestation the male goes into labour (usually at night), pumping and thrusting for hours to release his brood. Young are miniature adult seahorses, independent from birth, and receive no further parental care. Newborns of most species measure 7-12 mm. The number of young released averages about 100-200 for most species, but can be a low as five for the smaller species, or as high as 1,500.