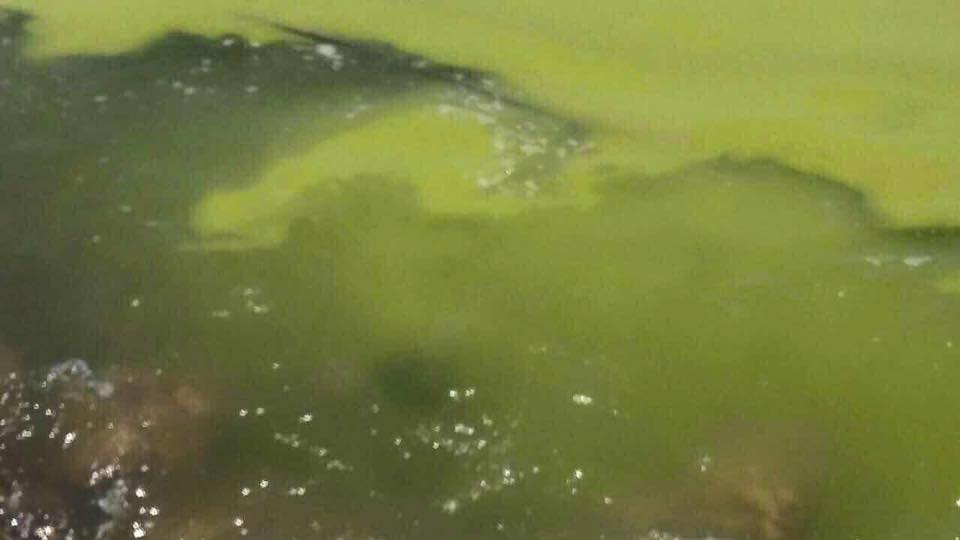 We have just seen a total collapse of the close inshore areas (200m-300m from the shoreline) in Kep Province, An Algae bloom created a green tide killing all the marine life within its reaches and turning the whole of Kep’s mainland coastline into a foul smelling mess of green death for a period of around 3 days.

So we would like to put it out there for Local and National Authorities our honest opinion based on good scientific evidence, and utilising previous studies and accepted theories of why this happens and why this happened now here in Kep, considering natural climate related factors such as temperature are not abnormal for this time of year.

The Species of Zoo Plankton involved is Noctiluca_scintillans and a good source of information on other Algae blooms can be found here harmful algae blooms.  With the number of harmful algal blooms around the world increasing in frequency and size over the last 40 years, especially in regions with large increases in coastal populations and over fishing, we feel that the human factors/stressors should be carefully studied and addressed.

Over the past three years we have research Kep’s reefs and Seagrass beds, and as recorded in our reports we have seen serious declines in health of almost all of Kep’s marine habitats due to numerous human factors. Our most recent Zoning report covers many aspects related to this and can be found here 31-stage-1-draft-zoning-plan-for-kep.

So here is a summery of those human factors/causes, impacts and stressors that we strongly believe have led to this current event and need to be addressed urgently.

This natural blooming event happens more than once per year in Kep and usually has no negative effects, it is actually a good natural food source and natural part of the food chain that is usually beneficial to the Eco system, but as the Eco system here is close to collapse due to overfishing, excessive illegal bottom trawling and electrified fishing gear this one had a very negative impact and turned into the classic green sludge bloom that is a danger to both people and marine life.

The balance this time was disturbed by many factors that I shall list below. 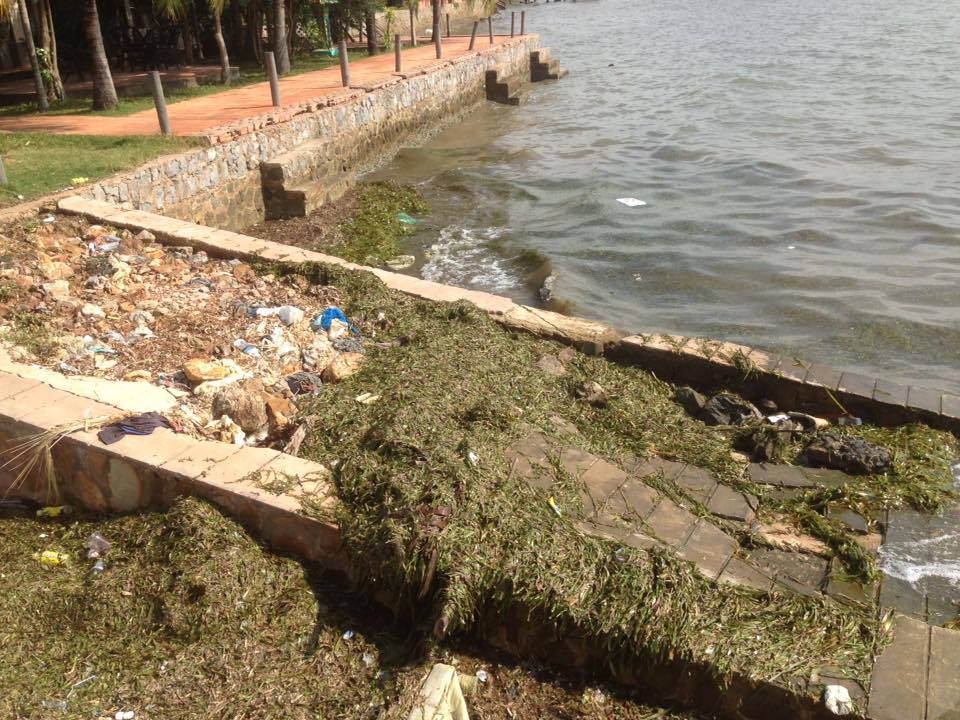 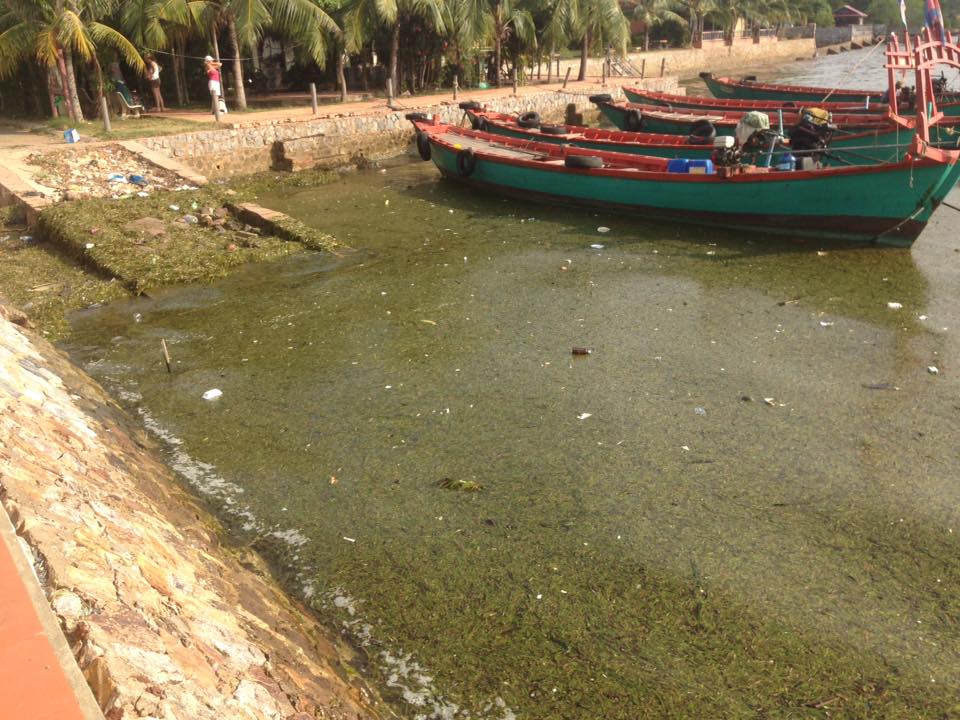 2. Excessive nutrients in the water due to large amounts of decomposing Seagrass caused by illegal trawling in the Seagrass areas.

Seagrass Helps to retain sediments and nutrients from terrestrial areas thereby improving water quality. Seagrass habitats are critical marine ecosystems which should be protected from sedimentation, They absorb nutrients which can cause eutrophication and toxic algal blooms.

Decaying seagrass fuels increasing algal blooms. This can cause a complete regime shift from seagrass to algal dominance. Accumulating evidence also suggests that overfishing of top predators (large predatory fish) could indirectly increase algal growth by reducing grazing control performed by mesograzers, such as crustaceans and gastropods, through a trophic cascade. 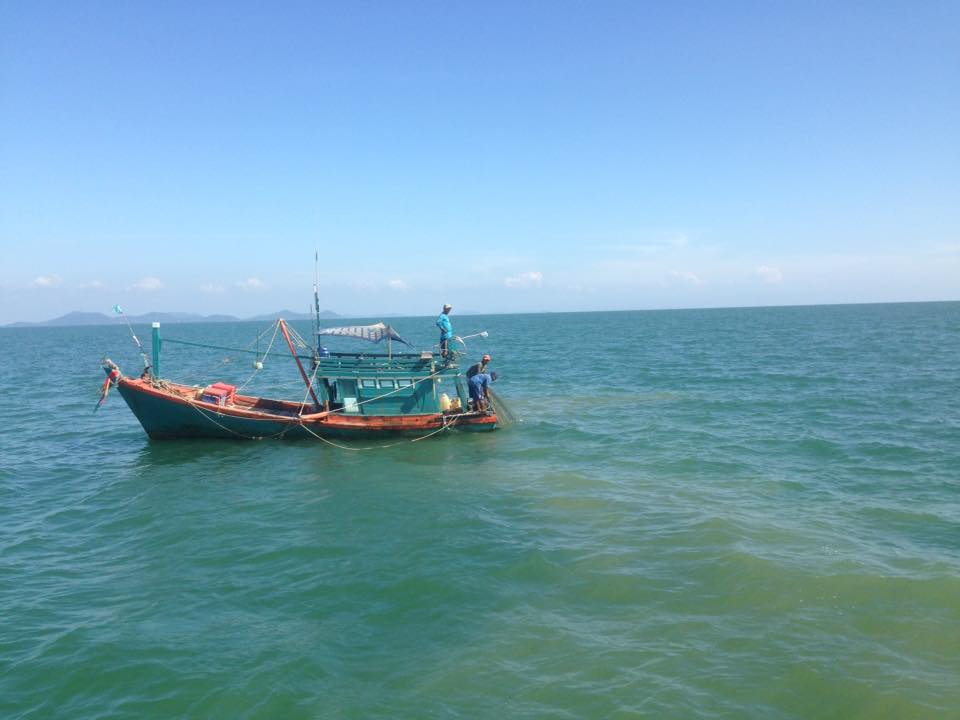 3. Bottom trawling – dragging nets across the sea floor to scoop up fish – stirs up the sediment lying on the seabed, displaces or harms some marine species, causes pollutants to mix into plankton and move into the food chain and creates harmful algae blooms or oxygen-deficient dead zones. References here Trawling is Destroying Our Oceans

4. When alive this plankton creates a normal amount of ammonia whilst feeding on phytoplankton, as this natural and non harmful bloom reached Kep it encountered many trawling boats running electric currents through the water column, this electricity killed it in large numbers, resulting in the pasty green sludge washing up in turn the mass deaths caused a spike in ammonia resulting in the marine life deaths

5. Water temperature, but this is a normal occurrence that within a healthy ecosystem would not result in the current situation.

We believe the largest contributing factor is excessive nutrient from decomposing Seagrass of which there has been days recently when it’s a meter deep washing up on surrounding beaches, and the large number of electric trawlers working in the areas between the islands and the mainland.

This should have been an event for tourists and locals a like to enjoy the phosphorescence and for the marine life to have a healthy feast.

We have seen today that the issue of trawling has not been taken into account in this situation, the issue of not trawling should not just be related to the issue of seafood safety it is related to the excessive nutrients released by decomposing Seagrass that the trawlers rip up day and night. These nutrients feed the bloom creating together with the temperature the idea conditions for the recent algae bloom. Also the disturbance of sediment into the water Column exacerbates the situation. The Electrified Nets used by some of these trawling boats also kills huge swathes of Zoo Plankton along with every thing else in their path, this can not continue as this is one of the main factors in the recent collapse.

So with the still large amounts of plankton in the water it is essential that trawling is banned and that ban enforced else this recent event will become a common occurrence!!!!!!!!!

Follow this link to see our Article on Our Campaign to stop Bottom Trawling in Kep that clearly shows the Cambodian laws that these illegal trawlers are breaking, these laws were put in place to protect the ocean and lesson the likely hood and effects of events like the one we have just witnessed in Kep, if these laws are not implemented and enforced these events will become more frequent and will directly impact both Kep’s fisheries resources and Kep’s tourism.

If you love Kep and you love the ocean we must work together to help stop this, Kep’s fisheries and provincial government have the will to stop them but lack the resources needed to stop these illegal trawlers that flaunt the law, ignore government orders and disrespect the authorities. Provincial government and we together as the people that are affected must come together to support the provincial government and do what ever we can to put a stop to these destroyers of the ocean. Again read through to get a full
Understanding of the current situation regarding these IUU trawlers and their affect to the ecosystems in Kep.